How do you Compare CAD Models? 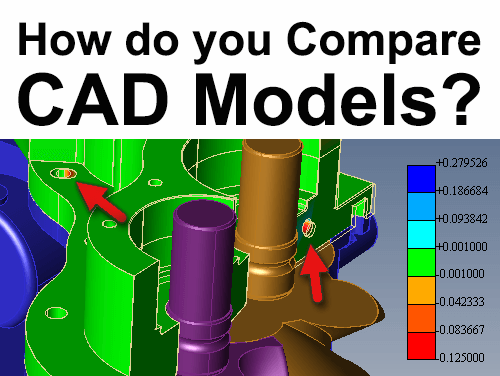 The need to compare CAD models

Imagine you are an estimator who works for a mold development company; a prospective customer sends you a CAD file and asks for a quote to have a mold made. You pull up the model on your CAD or viewing system, make a few measurements, and take your best guess at what it might cost to make a mold for this part. You send the quote to the prospect, and a few weeks later, they send you a revised part and ask for a new quote; they also communicate that the only change is the size of one hole.

Your inclination is to do a quick visual check to verify there are no other changes, and quote a similar price to the prospect, since this is faster than evaluating the entire part again.

Here’s where the problems could begin: Figure 1 – Which would you rather analyze?

How do you compare CAD models to see what’s changed?

How to compare CAD models

Comparing two CAD models is simple. In this article, we’ll look at the simplest case; two single parts. Here are the steps: 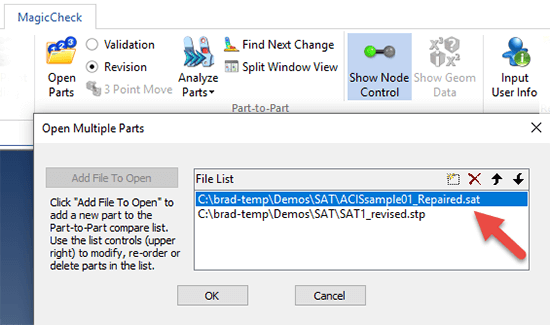 From the MagicCheck toolbar, choose Open Parts. Select both two parts (usually the original part and the revision you are checking it against).

Make sure that the original, or ‘source’ part comes first in order. If the parts come into the dialog box in the wrong order, use the arrow tools to move a selected file up or down in the list. This is necessary because when you analyze the parts, the source part is rendered to indicate where the revised part is out of tolerance to it.

Figure 3 – MagicCheck Settings allow you to set your tolerance.

Both parts should now be overlaying each other on your screen. At this point, it’s a good idea to check MagicCheck settings for part-to-part.

In figure 3 you can see that tolerance is set to 0.001, or one-thousandth of an inch; if you work in millimeters or centimeters, you’ll want to change your unit type in the General Settings under Settings > Units. Anything outside of the tolerance you set will end up colored either a shade of red or blue.

In figure 4, both holes are colored red, meaning that they cut into the envelope of the original solid body.

There are tools to enter your company data and logo at the top of the report. Reports can be saved out as 2D PDF or 3D PDF.

Of course there is more to MagicCheck than this; you can parse through changes with the Find Next Change button, create custom views of areas of concern, split the window view so you can view both parts separately yet rotate and zoom them simultaneously, select the Source and Target nodes to see each respective model in rendered mode while the other model is shown in wireframe mode, dimension geometry and use the micrometer tool to generate part thickness values for both parts simultaneously.