“The interface is very easy to use. TransMagic is much faster and costs much less than purchasing individual CAD systems. TransMagic gave us the ability to import other CAD formats into our CAD (system) for a more productive turnaround.”

Stark Manufacturing, a leading supplier of air-conditioning parts in the automotive industry, faced the challenge of being able to read CATIA files and bring that data into their own CAD system, as well as the systems and formats used by their own customers and suppliers.

The Expense of Owning CAD Systems

“At the time, our organization purchased a seat of CATIA for reading native CATIA files sent to us by our customers. The CAD system was very costly and because it wasn’t a system we used on a regular basis our designers weren’t as efficient as they were with our own CAD programs”, stated Michael Garrison, CAD Manager.

Rather than own a seat of CATIA and other CAD software, Stark Manufacturing decided to invest in a CAD translator  to read CATIA and other formats. TransMagic was selected because of its short learning curve, ease of use, and capabilities. Michael Garrison states “The interface is very easy to use. TransMagic is much faster and costs much less than purchasing individual CAD systems.” Michael adds “TransMagic gave us the ability to import other CAD formats into our CAD (system) for a more productive turnaround.”

The use of the product quickly extended to include additional CAD formats, and has been empbraced by the sales department. Now they are also operating with SOLIDWORKS, Creo, STEP, IGES and ACIS formats. The sales team has been able to improve both the speed and accurace of job quotations by being able to view a wide variety of CAD models during the proposal phase.

Stark Manufacturing is now able to communicate effectively with their customers and suppliers who all use a variety of CAD systems. They also use TransMagic as a way to show the sales team products modeled in other CAD platforms. 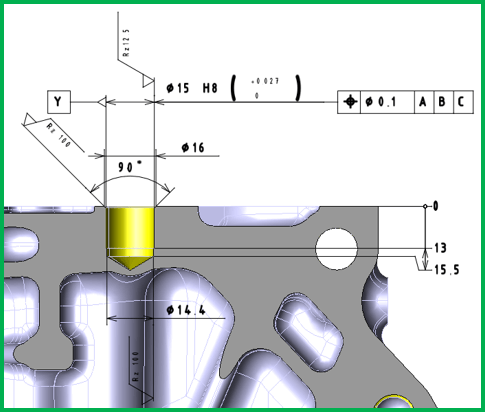 Figure 1 – Sectional PMI makes it possible to show critical hole details for dozens of holes in a single engine block.

A major automotive OEM communicated asked the TransMagic management and development team if they could find a way to minimize or eliminate scrap waste and costly manufacturing errors in the development of engine blocks.

One of the most critical manufacturing operations is drilling holes in engine blocks. To save time, dozens of holes on each side of the block can be drilled simultaneously. If just one hole is drilled in the wrong spot, it can cause the entire block to be scrapped, and at this stage of production, the engine block has already had quite an investment in terms of casting and machining. One or more scrapped engine blocks can be alarmingly expensive.

In the past, the placement of the gang-drilled holes was pre determined by 3D CAD models and associated 2D sectional drawings of each hole. Because of the great number of holes in a single engine block the 2D drawings are quite large, convering entire walls in the factory. Because the models and the drawings were not associative, it was not uncommon that a technician would update the dimensions of a hole in the 3D model, but forget to update the dimensions on the drawing – or vice versa. Keeping the 3D model and the drawing in sync was a heavy burden for the design and manufacturing teams.

The relatively new technology of Model-Based Design (MBD) and Product and Manufacturing Information (PMI) have presented a partial solution; keeping the drawing information attached to the 3D model, so that there is no longer a drawing to keep track of. Geometric Dimensioning and Tolerancing (GD&T) is right on the model for the machinists to see. MBD and PMI eliminates the risk of out-of-sync 3D models and 2D drawings.

What was missing was sectional PMI – that is, PMI which can be seen ‘in section’ just as the hundreds of drawings showed in the past. The TransMagic development team worked with the OEM to develop PMI sections according to their needs, and the result is that now the OEM can much more easily manage their hole placements, without the burden of updating hundreds of drawings (see Figure 1).

Sectional PMI is now a part of all TransMagic products – to use it, just open a model that contains sectional PMI and launch the PMI View Browser.