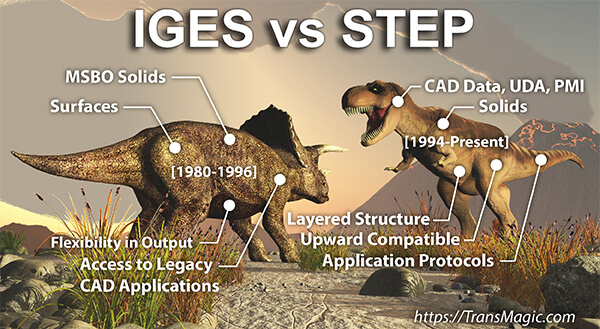 Life before IGES and STEP

In the mid 1970s there were a handful of CAD vendors, often competing for the same business from large companies such as General Electric and Boeing. Some of the big vendors in those days were Applicon, CADAM, CATI (early CATIA), SDRC, Anvil, ComputerVision and Intergraph.

In those days, if Boeing for example was using CATI, and they needed to incorporate some subsystems designed by one of their suppliers (who were using another CAD system such as Applicon, for example), they had to write a translator specifically from Applicon to CATI. As you can imagine, the problem quickly became unmanagable as the number suppliers using different CAD systems increased. If there were some kind of CAD exchange standard, each CAD system would only need to translate to and from that single format.

The fascinating story of how IGES came to be

We’ve written elsewhere of how IGES was spawned, and it’s interesting enough that it at least part of it bears repeating here. The following is quoted from a National Institute of Standards (NIST) Special Publication.

In September 1979, frustration came to a head at the two-day Air Force Integrated Computer-Aided Manufaturing (ICAM) Industry Days meeting. On the first day, a representative from General Electric (GE) challenged a panel of CAD vendors, which included ComputerVision, Applicon, and Gerber, to work together to enable an exhange mechanism. While this need was intuitive from a user’s perspective, this was a very threatening proposition to the CAD vendors – who feared that sharing the structure of their databases publicly would be tantamount to giving away their competitive advantage.

It would have been easy to gloss over the challenge; after all, the major vendors all had at least token representation on the ANSI (American National Standards Institute) committee responsible for CAD standards. Instead, the ComputerVision representative responded with a challenge of his own: if Boeing and General Electric (and perhaps others) would contribute the CAD translators they had already developed, the vendors would share their database structures.

What led to this offer was just the right mix of business motivation and intrigue. Large Navy contracts were looming on the horizon, and no vendor wanted to look unresponsive to customer requirements.

In the evening after the panel, several interested parties gathered and asked themselves if a common transfer was really possible. The room had the right mix of people and ideas at the right time. This included an Air Force, Navy, and NASA representative, each willing to fund $25,000 for such an effort. A National Bureau of Standards representative, after a call to his boss at home for approval, was willing to champion it as chair and coordinator. The IGES Organization was formed by NBS in the spring of 1980.

How problems with IGES led to STEP

As the IGES team considered what the next version of IGES should include, they determined that there were some fundamental problems with IGES and that a new standard should be developed. Some of those problems were (again, from the same NIST special publication):

– Flavorings – IGES contained several ways to capture the same information, which made proper interpretation largely dependent on the particular “flavor” of the pre- and post-processors.

– File size/Processing time – IGES was criticized heavily for requiring large files that took hours or even days to parse with the average computing power available at the time.

– Loss of information during exchange – Information will inevitably be lost when information is passed between two CAD systems with inherently different capabilities.

– Lack of discipline, architecture – There was a perception that IGES was developed without rigorous technical discipline, and that formal information modeling would be useful.

– Upward compatibility – The need for generations of processors to parse files compliant with earlier versions of IGES thwarted the breadth and rate of change in succeeding versions.

– Automated a paper system – IGES was seen as a method to exchange engineering drawings, but not capable of capturing complete product data (including administrative information) to enable more sophisticated automation which would reduce or eliminated human intervention to translate.

– Subsetting – Vendors selected and implemented only portions of the whole of IGES, thus making exchange between two systems impossible without prior agreement on what was to be exchanged.

– Processor testing – There was no mechanism for testing processors or resolving errors between two processors.

There was a real, long term problem with IGES that would be difficult to fix: IGES communicated the lines and symbols appearing on an engineering drawing… but it failed to communicate the meaning of the information the engineering drawing was created to convey. The… study revealed that product features must be transmitted with the geometry so that computer -based applications could “understand” the engineering drawing. For example, an application looking at an IGES representation would see merely a circle on a part. The desired result was to be able to distinguish whether that circle was a surface mark or a hole. 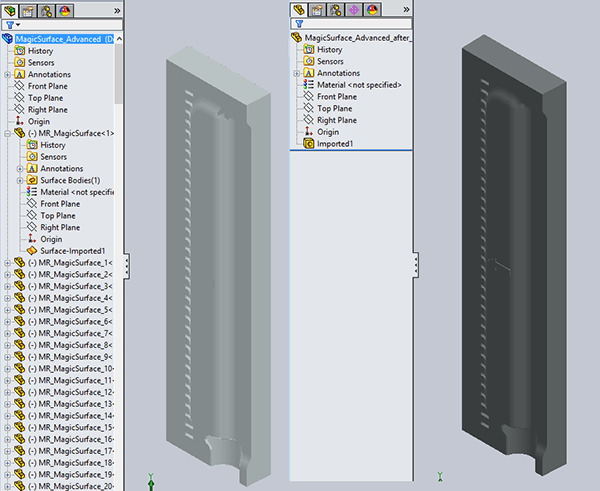 How unstitched surfaces look in SOLIDWORKS (left) vs the simplicity of a solid model (right).

From a 2020 perspective, some other shortcomings of IGES are clear:

Why STEP is better than IGES 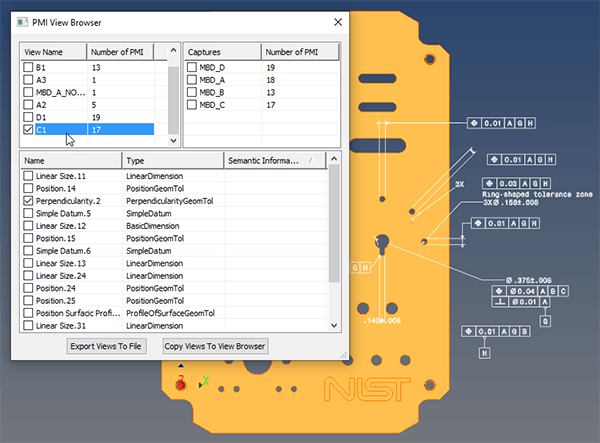 STEP was released in 1994 by the International Organization for Standardization (ISO). STEP stands for Standard for the Exchange of Product model data, but it is formally known as ISO 10303. Unlike IGES, which ended development in 1996, STEP development continues to this day; the latest version of STEP is AP 242.

STEP addressed each of  the IGES shortcomings in turn:

Other advances the authors built into STEP

Where Does IGES Still Make Sense?

IGES Write Settings can give you the flexibility to write out to surfaces, wireframes and MSBO solids.

Normally, the only time IGES will beat STEP is when you’re working with an old CAD application which cannot read anything else, or in cases where the CAD vendor has placed a premium on the STEP translator and the customer has opted not to buy it. In these cases IGES may be the only option.

IGES is also a very flexible format. IGES Read has a wide range of options in terms of trimming curve preferences, IGES flavors, reading Manifold Solid Boundary Objects (MSBO – IGES’ implementation of solids). IGES Write (see figure at right) can write to MSBO solids, surfaces and wireframes, trim curve preferences and IGES flavors. As a side note, though some IGES translators do support solids, they are typically rarely used. In the days when I used to support customers with problematic CAD files, I was occassionally able to recover a corrupt file by resorting to IGES and making use of the many settings.

What’s even better than STEP? 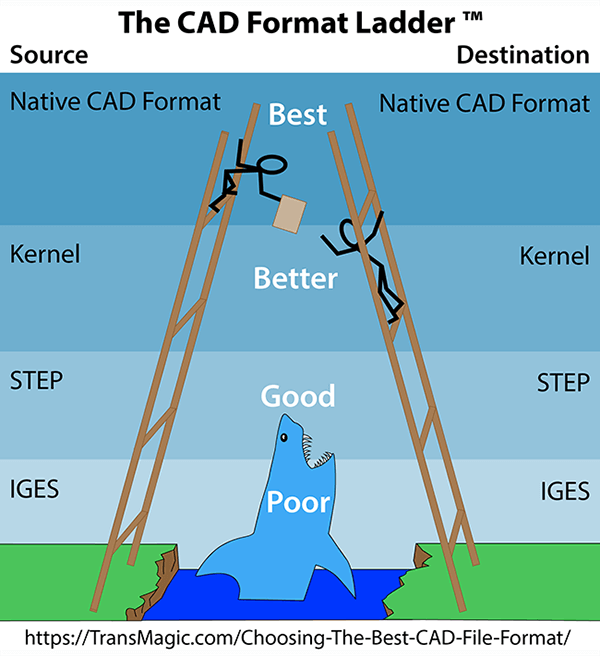 When you have the option, choose the native file first, the geometric modeling kernel second, and STEP third.

When considering IGES vs STEP, STEP is still the best, most dependable CAD format which every modern CAD system can read and write (though you may have to pay the CAD vendor extra for the STEP module). It’s really hard to overestimate the flexibility and power that the STEP format has given, and continues to give the CAD world.

If your struggling to read that CATIA or NX file, or you need to be able to write to a CAD format, and you want the best translator you can get your hands on, consider TransMagic. The formats TransMagic can read and write are shown on our CAD Formats page.

There is a free eval which will read all major 3D CAD formats, but if you need to be able to write to CAD formats, you’ll need to ask for an eval of either PRO or EXPERT. Get the Free Eval here.

Our recent IGES post goes into the history of IGES as a ground-breaking universal CAD format, and a wider range of issues that eventually resulted in the STEP format.