What CAD Format Do I Have Here? 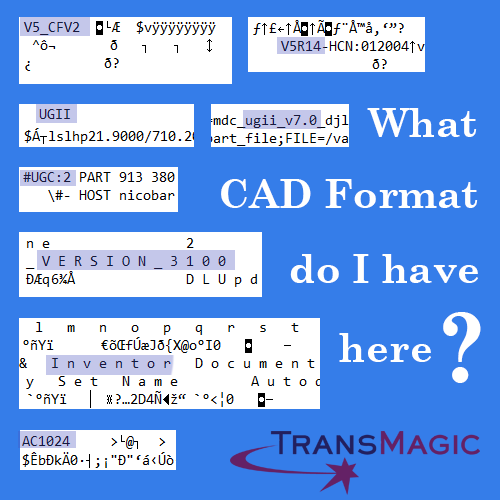 This has happened to all of us at one time or another; how do you know what CAD format you are dealing with?Especially since Unigraphics/NX, and ProE/Creo both use *.prt for parts, for example, which one is it? And what version is that DWG file you got last week?

Fortunately, with a simple tool editor such as Windows Notepad or Notepad++, we can tell quite a bit. Here is an index of the most common native CAD formats (CATIA, UG/NX, Pro/E & Creo, SOLIDWORKS, Inventor and Autocad), and how they appear in Notepad:

CATIA: V4 part and assembly files end in *.model. V5 and V6 3D files end in *.CATPart (parts) or *.CATProduct (assemblies).
In Notepad: CATPart V5 part and assembly files will start with V5_CFV2, and you can also tell what release of V5 by searching on V5, for example – V5R20SP6HF16 built on 10-25-2011.11.21
CATProduct files will also have the version at the start of the file: V5_CFV2
For V5 files, if you search on CATSummaryInformation or LastSaveVersion you will find the last saved version, the release, service pack and minimal version to read.

Unigraphics/NX: UG/NX part and assembly files always end in .prt.
In Notepad: UG or NX files will contain and normally start with UGII (that’s UG with two big letter i’s). Search on “ugii” to find the version, for example: ugii_v7.0.

Hopefully this info helps you solve some of your own file mysteries.
If you come across additional ways of detecting format and version, let us know at social@TransMagic.com and we’ll post them here.

Alternately, you can discuss your needs with one of our account reps by emailing sales@TransMagic.com, or asking for sales at 1-303-460-1406.