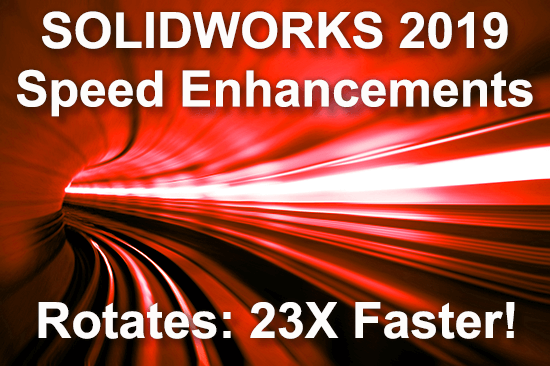 Faster with nVIDIA and AMD cards

In this test by Alin Vargatu and Alen Topic, performance was achieved using an nVIDIA Quadro P4000 card, in OpenGL with RealView and Shadows off. For other settings on the nVIDIA card (Shadows On, RealView on, etc.), the improvements were still 23+ times faster than in SOLIDWORKS 2018, and if we look at the same settings for the AMD Radeon Pro WX 7100 card, again SOLIDWORKS 2019 boasted between 13 and 17 times faster viewport rotation results as compared to SOLIDWORKS 2018.

What could be the reason for these speed increases? Besides an ongoing code rewrite which began in 2015 and continues today, the Graphics R&D team at SOLIDWORKS has been working with graphics providers nVIDIA and AMD to take advantage of techniques developed primarily from optimizing for video game performance.

Some users have tried to reproduce these results and have run into minor bugs that will likely be fixed in SP1 – until then, to learn the workarounds, check out this thread on the SOLIDWORKS forum.